Learning about the local wildlife

Over the past 10 months Jamie and I have learned to live with a wide variety of animals and species that Australia does not have including snakes, elephants, spiders, scorpions, termites, lions, antelopes, hippos and bats to name just a few. One of my first tasks when we arrived back in February 2016 was to work with the housekeeping ladies to prepare the tents and chalets for the season ahead. I would help the ladies clean the tents which included rolling down the canvas windows. After doing about 5 windows I remember being warned by the ladies to watch out for scorpions which luckily to date I had not encountered one as their sting causes huge amounts of pain.

We are closing the camp in less than four weeks and have had a number of staff stung by them during the season including Jamie’s work shop boys when they are maintaining the outdoor furniture so I decided it was time to learn more about these little creatures.

The scorpion dates back to the Silurian era 430 million years ago and they have adapted and now live in a wide range of environmental conditions and found all over the world except in the Antarctica. 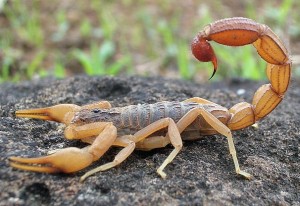 Scorpions have 4 pairs of walking legs and when it comes to eyes they actually have two eyes on the top front of their body and usually two to five pairs of eyes along the front corners of their body.

From the reaction our local born and bred staff give you the scorpion sting is very painful though it is usually harmless. There are over 1750 species worldwide and there are a few species reported in Africa that may need medical attention. They are generally inactive other than hunting which they use their venom to kill or paralyze their prey or use brute force. So in summary the scorpian is a survivor and thankfully neither Jamie nor I have encountered one of those in camp and don’t plan on finding one though I would love a photo for this blog!

Termites…well that is another whole blog though here I a video of two of our night watchman gathering termites to eat. The locals take off the wings, fry them in butter and eat them! Watch this to learn ….sorry coming soon as I am waiting for you tube to load my video.